Keep off the Grass 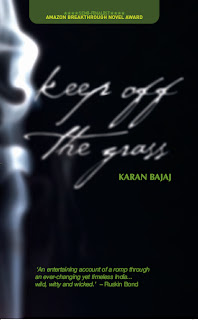 Indian literature has transformed into this new urban style where writing is not just restricted to writers.  As the phrase goes “Everyone has a story to tell”, and they are indeed doing the same.
The book is funny and interesting enough that you can go out dating with it...but love maybe not. Captivating definitely because the writer has successfully been able to relate a Yale graduate-Wall street investment banker to any other average student from IIM or from any institute for that matter.  The title of the book “Keep off the Grass” is sprinkled like icing-sugar all over the story once the protagonist (Samrat Ratan) lands in India. There are various bites from the inside world of IIM (B) which overtly discloses the dirty picture of a cut-throat competition existing in a nation of over 1-billion population, the rat-race for the best GPAs, internships, placements (read packages), the mean corporate world where `happiness’ is defined as the upward projection of sales in the market even if you have to kill to be there. Then come the extracts of spiritualism and religious fervour prevalent here which has attracted many foreign visitors even before Zeenat Aman’s pot-smoking hippie friends in Dum Maro Dum to till date. The ABCD (American Born Confused Desi) Samrat gets fancied and as usual more grass is smoked. Samrat with his two friends Vinod, Veer-Chakra winning ex-Army officer who fought in Kargil (headstrong with his convictions like not working for MNCs to deceive his mother-land) and Sarkar, a smartass IIT graduate (laid-back on a bed of sarcasm wrapped in his illusive world blurred with smoke) struggles through his 2 years journey in IIM(B) in a quest to find what he really wants from life.  A million-dollar question that has befuddled many of us someday.
Posted by Aicha at 9:51 AM