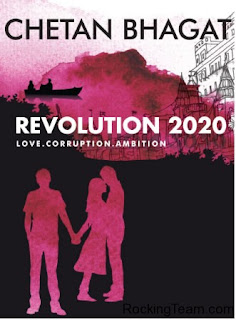 
I drew an analogy, every time a Chetan Bhagat  book starts selling in the country its like the release of a latest Shahrukh/Salman flick released on Friday which is compulsorily watched by the revolutionary or the not-so-revolutionary” youngsters. The book no doubt relates to every Indian engineering student who has to go through the ordeal of appearing for all the entrance exams, the hype created over the coaching institutes, the profitable education-business, the truth behind all the “xyz-Institute of technologies” . Hence, it will be able to keep you hooked for a while resulting into many smiles or smirks meant for internal jokes between you and the book( provided you are/were an engineering student in this century) . The message comes across strongly throughout the book : voice against corruption by those rogue politicians( which is pretty much in ! ). I felt the title  ‘Revolution 2020’ was more of a misnomer , instead it should have been ‘GangaTech’ :P.Good for a casual read on a boring Sunday. As predictable as it can be, after his four previous books :
-Enough revolutionary to stir debate topics at school & college level , utmost can be a one evening talk show by NDTV
-The protagonist/narrator of the story suffers low self-esteem syndrome frequently but still successfully gets to sleep with the girl. The girl as usual gives in easily ( just like all of the 4 books!)
-The book looks and has the very same dimensions as the previous 4 by Rupa Publications, although its worth Rs.140 this time, instead of the dollar shop price of Rs.99 :P!
Posted by Aicha at 11:04 AM