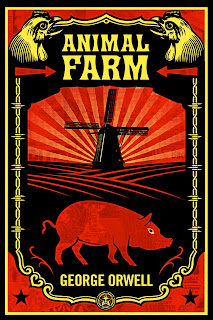 
A classic masterpiece written between 1943 & 1944 by English novelist George Orwell as a satire to strongly oppose against Stalinism. What hooked me most in this book is that it still has an uncanny resemblance to present day rise of a totalitarian regime in a nation. The book was not published until 1945 since most publishers refused, fearing rejection and unpopularity as Britain was an ally for Soviet Union back then.
The original title - "Animal Farm: A Fairy Story" is based on a fictional tale of how animals overtake a farm from their supreme enemy - the humans. They get rid of the farm owner Mr. Jones and his men and rename the Manor Farm to Animal Farm. The Animal Farm which was to be governed by principles of Animalism was based on seven commandments. The story beautifully unfolds as to how the pigs take charge in the daily administration of the farm on the pretense of being well-read and start delegating work to farm animals while taking all privileges and reaping benefits off other's hard work. A victorious war after the humans attack them causing deaths and bloodshed instills further confidence in the animals to operate their own farm with pride and independence.
But driving out humans did not mean their virtues were gone too and jealousy creeps inside one of the leader pigs- Napoleon against Snowball and he purges Snowball out declaring himself as the leader. The lies, malice and false claims escalate Napoleon to an indispensable stature and he uses Snowball's tarnished image to instill fear, manipulate and provoke the hard-working naïve farm animals against a non-existent enemy; while abusing power in every form. The commandment rules keep bending for the pigs while the clueless animals mutely spectate without opposing fearing the ruthless dogs kept by the pigs.

The satirical intention is so tastefully put out that you can only smile and exclaim while connecting dots with the present. I'm pretty sure Orwell did not have future dictators in mind when writing this novel but as they say, history repeats itself!